Surmounted by its characteristic large dome, the Sanctuary is an annual pilgrimage destination for the parish community of Castagnole delle Lanze.

Here is venerated the image of the Virgin Mary painted in the 15th century on the outside wall of a chestnut dryer, which was located on one of the many roads that connected Liguria to Piedmont.

It was during one of these journeys that the miracle of restoring sight to a child blind from birth occurred. The Holy Icon became an object of veneration and was restored by the David family as early as 1618.

In 1818 the image was cut out, with part of the wall, and placed in the niche above the altar.

The organ of the Sanctuary, built in 1855 by the famous organ builder Nicomede Agati from Pistoia, is of great value and has recently been restored.

Among the ex-votos conserved, the series of panels painted by the painter Carlo Leone Gallo from Cairo Montenotte is of considerable interest.

In 1865, Our Lady of the Desert was proclaimed patron saint of the Bormida Valley.

More in-depth information, including opening hours and Holy Masses, is available at the Shrine’s website at www.desertodimillesimo.it

SANCTUARY OF THE DESERT 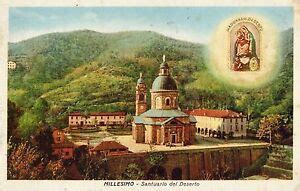 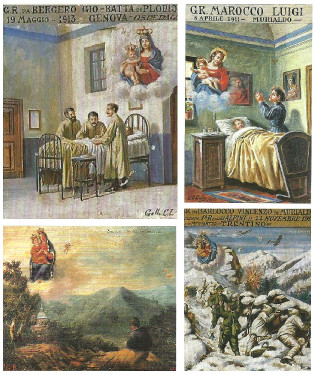